A Card & A Pen-My Lifetime Franchise… 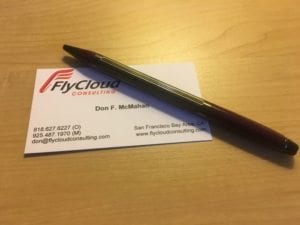 For those who have worked for me over the years (a lot of salespeople) this will not be news. I am definitely “Old School” when it comes to some sales fundamentals. It’s like Madden football, you can’t escape the need for great blocking and tackling no matter how many trick plays you have in the play book. I’m not even sure when I started this, but I think it was in the good ole Fujitsu days (1996-2004) when we were playing catchup with the big dog at the time (Kodak).

We were working to take share with the old-fashioned idea of spending more time with the customer than they did (it worked). I was hammering the team on the fundamentals of just showing up, something that had not been done in the previous years and I was coaching the basics. Somehow the idea of a cash fine for not having a business card or a pen popped into my mind and then it became part of the culture. Show up ready to play was my mantra and if you didn’t have a card and a pen, you were at a disadvantage to the other guys. Then, over the course of many years it continued, the fine was $5 for either infraction (or the next highest bill in your wallet). I made the reps sign the bills and then I posted them on the “Wall of Shame” in my office. I especially enjoyed having multiple bills from the same offender, it was so just.

My instincts were not just for show, I know for a fact it worked. I recall fondly the tablecloth contract I wrote at dinner with the President of Tech Data at the time, Ken Lamneck. We made our annual commit on the tablecloth at a nice dinner down in Tampa and to make a point, Ken had it stapled to the bullpen wall in Tampa, all the other vendors got to enjoy the Fujitsu commitment for the year signed by the VP of Sales and their President. Add to that numerous other “napkin contracts” I did with partners and vendors over the years and the value of the pen was indisputable.

Of course, my career took me from Fujitsu to Visioneer, and surprisingly even to Kodak where I continued The Franchise and the basic point for the team. Show up ready to play. It even got more fun when I ran into reps who no longer worked for me and they still paid the fines!  I think everyone appreciated the tradition as a sound Sales Practice and not just keeping Mac happy… (mind you, they were not happy to part with their cash, but part they did).

I was just thinking about The Franchise this week when I ran into some management at my son’s company and had to give them the One Time Pass for what I still consider almost a capital offense. What excuse do any of us have to show up at our largest customer event of the year and not be prepared to Make A Deal?

Since the ballpoint pen turns 130 years old this year, it seemed like a good time to celebrate one of the finest pieces of technology that has produced more revenue than all the cool apps in the world have to date.

“The first patent for a ballpoint pen was issued on 30 October 1888 to John J. Loud, who was attempting to make a writing instrument that would be able to write “on rough surfaces-such as wood, coarse wrapping-paper, and other articles” which then-common fountain pens could not.”

Business Cards Were Invented by The Chinese in the 15th century as “calling cards” to give people notice they intended to visit. 200 years later the Europeans invented “trade cards” that essentially were the precursor to the modern website, with graphics and product information.

Per the Sage story, “In the United States, however, business card use became widespread in the 1890s (the so-called Captains of Industry) or “robber barons,” and the cards achieved their current level of ubiquity by the early 20th century.

“Business cards never have downtime. They’re always accessible, and never have dead zones or internet outages. Your business card can be viewed no matter where you are located, and even times when cell phones and other devices must be turned off, such as an airplane ride or in a hospital. Your business card is always working for you. Your potential clients can take it with them and that keeps your brand from just being a name that floats around the ether.”

So,in closing, I am not apologizing for having a little “old school” left in me, if “old school” is closing deals on the tablecloth at dinner, then let’s have a little more of it. And to all my salespeople, be prepared to do business, all the time… 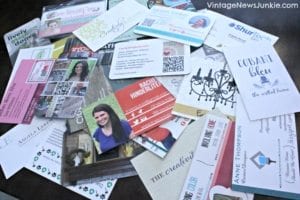 About the Author: Don McMahan